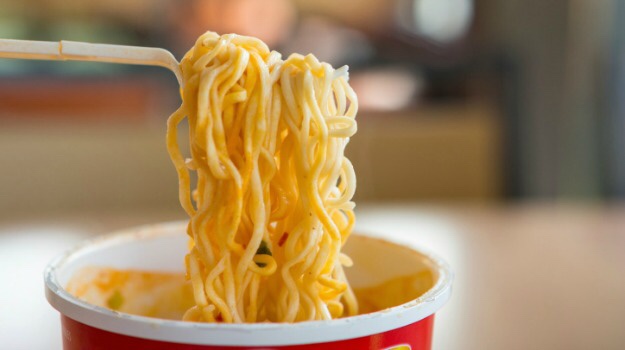 Here I am walking to my corporate lunch room with my Cup of Noodles, Cheez-Its’ and water, while the aroma of everyone’s food consumed the area, it smelled like some good ole meatloaf and mashed potatoes. I’m thinking “Girl, why didn’t you grab that leftover spaghetti.” Not because I would prefer that over my noodles, but because I start feeling a little embarrassed. Just as I was about to get up from the table, I heard “Sit down and be humble.” (No, it wasn’t Kendrick Lamar) I literally laughed out loud! Who am I to be embarrassed about having food!!!!

I sat my proud self down, added my water to the cup and enjoyed my lunch.

How many things have you not done in fear of what others would think? More than likely, that person that you’re so worried about impressing really doesn’t care anything about what you do. And if they did, you’re not the one with the issue, they are.

I’ve made so many decisions based on what I thought people would think of me, and if my false image would be exposed. I never wanted people to view me as being less fortunate or naive. I faked it a lot of my life because my background was poor and I didn’t have the ideal childhood. I lied about so much that I started believing myself and before I knew it, I was a total counterfeit. My self perception was horrible.

Ladies, I was soooooooo miserable. Wearing a mask is a lot of work. It wasn’t until I met My Lord, My Savior, My Friend and the great I Am in my life that I learned to appreciate the person that He created me to be and not what the world thought I should be. I was finally free! And my life became all about pleasing Him but as you can see, that ugly pride sneaks up every now and then, and I get a great reminder, “Sit down and be humble.”

Yes, that ring is gorgeous but it could be very ugly in disguise! I’m sorry ladies but I have to say this based on my experience, when he put that ring on my finger I changed immediately! From beauty to beast. He stopped being my knight in shining armor and became my highest expectation. Of course we had a great honeymoon period, all smiles, hugs, kisses, compliments and a lot of mushy stuff! However, it was over quickly because the expectations begin to take precedent when I start focusing on what I wanted and thought he should change. I became this person that I stopped recognizing, although I never disrespect my husband, my demands were high and insecurities were in full effect.

You see, this is my 2nd marriage and I can admit that back then I had no clue on how to be a wife and what was expected of me. Not to mention, God was nowhere in that marriage. I prayed for me and not for us. I changed my last name and I felt that was more than enough!  I didn’t like sharing my money or thoughts. I felt extremely defensive and guarded. I refused to be vulnerable because I knew he would consider that as a weakness and walk all over me. So I developed a “I don’t give a care” attitude. To make a verrrry long story short, we were not as one but apparently separate people residing together. We operated as roommates and not as husband and wife.

I told myself that my next marriage would be based on biblical principles and wisdom. No more worldly stuff. I remained single for 4 years, and during this time I read books, attended seminars, and meditated daily on everything “self help.” I became a walking reference guide. Haha!

All this wisdom was great but somehow I got amnesia because the material went straight out of the window when I said “I do.” I started walking in fear and not faith. I was so afraid of not being the perfect wife and making past mistakes. I start overthinking errrrrrthang! Lol. He would say yes and I would articulate that as “I’m only saying yes because I’m not courageous enough to say no.” Hot mess right? But before we were married, his word was never questioned. I trusted what he said and took it at face value. No questions what-so-ever! Girl, I was dissecting his words and actions! It was becoming really miserable for us both. Until one day my awesome husband told me “If we keep going this route baby, we’re not going to make it.” That truth crushed me but also set me free.

I finally put God in His rightful place and asked him what the heck was my problem. Now, at this point I needed help and fast. He told me that “He doesn’t owe you anything but you owe him My love and grace.” From that day forward my mission was to stop looking at my needs and focused on his and what God expected from me. There were challenges because the flesh is weak but the spirit is willing. I had to realize that before I put that ring on, I was focused on loving him, as is. I had no unrealistic expectations because I simply adored everything about him. Marriage convoluted my love and enhanced my fear of failing.

So when I say take the ring off ladies, I’m coming from a place of doing a heart check. Have you become so concerned with your own needs, that you forgot about him? If he chose you to be his wife, it was because you loved him (good, bad & ugly). Don’t stop now!! If he has changed a little, it’s probably because you have but no worries, he will be won by your good behavior. Trust me, but if you don’t, just ask my husband :-). We good over here. 😁